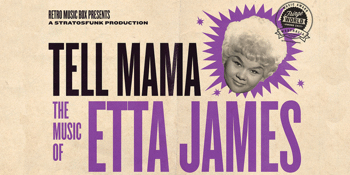 The music of Etta James, including songs like At Last, Something's Got a Hold on Me and I Just Want To Make Love To You, will be celebrated by the 13-piece band The Milford Street Shakers on June 18.

In the 60s and 70s, Etta James produced some fabulous music at the same time she was battling incarceration, physical abuse and drug addiction. She died from leukaemia in 2012.

Her song, I Just Want To Make Love To You, won her the number 22 spot on Rolling Stone Magazine's list of the 100 Greatest Singers of All Time.

The Milford Street Shakers, will feature Yara Neto as lead singer for the tribute performance, first performed by an earlier incarnation of the band, Stratosfunk.

The West Australian in 2013 described Tell Mama as "a commanding and musically inspiring show" and also won Stratosfunk the 2013 Fringe World Music Award.
Australian Stage said of the show "The Music of Etta James is a great show – you will come out buzzing and on a musical high".
Aussie Theatre said "…she ripped into 'Tell Mama' and the audience began to sway, shoulder shimmy and tap along. They never really stopped".

Etta James' style evolved over the years and spanned a variety of music genres including rock 'n' roll, soul, R&B, gospel and jazz.

She was a multi-Grammy award-winner and was inducted into the Rock & Roll Hall of Fame, Blues Hall of Fame and the Grammy Hall of Fame.
The New York Times described James as having "one of the great voices in American popular music, with a huge range, a multiplicity of tones and vast reserves of volume”.