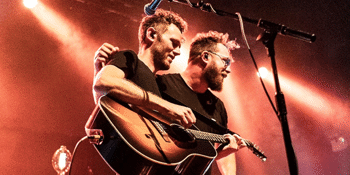 with special guests
The River (Margaret River, WA)
Friday, 27 May 2022 7:00 pm
3 days away
18 Plus
Music
Send this event to
Love Police are overjoyed to announce old mates, Ian Ball and Ben Ottewell from the band Gomez, will be returning for a set of stunning, intimate live performances, marking their Australian debut as a duo. Featuring an eclectic array of work spanning across their 20+ year career, fans can expect to hear anything and everything from the warm, mellow sounds of their band works, to their accomplished solo careers, all alongside nuggets of the unheard and unreleased. Since their 1998, Mercury Prize winning debut Bring It On, England’s Gomez have consistently blown away their audiences, be it their loyal fanbase or critics worldwide and this rare outing is not one to be missed, for seasoned followers and fresh fans alike.
The presence of multiple, uniquely talented vocalists within Gomez has always been one of their primary strengths, setting them well aside from their contemporaries. The powerful, soulful voice of Ben Ottewell has always beautifully complimented the softly sung Ian Ball, and when Tom Gray’s presence is thrown into the mix, the three voices explode in musical passion of mythical proportions. Their solo careers also highlight these harmonious differences: Ben Ottewell’s 2011 solo debut Shapes & Shadows displayed his effortless ability to craft Singer-Songwriter tunes with overtones of Blues Rock (a sound further dived into on his following two records, Rattlebag and A Man Apart), while Ian Ball explored a sound more comfortably akin to Indie Pop and Folk Rock on his one and only solo album, Who Goes There.