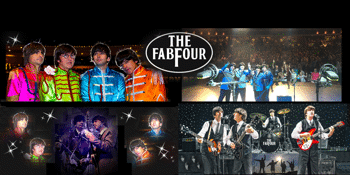 The Ultimate Beatles Tribute
The River (Margaret River, WA)
Friday, 26 November 2021 7:00 PM
113 days away
18 Plus
Music
Send this event to
The Beatles tribute show out of Perth has performed throughout the country and South East Asia for 25 years, celebrating 27 years since forming in 1992. They have performed 5 x Leeuwin concerts alongside such greats as Shirley Bassey, George Benson & Tom Jones.
The band put on an amazing tribute to The Beatles and have worked as a headline show over the past 9 years for Royal Caribbean International Cruise Ships performing all the classic Beatles hits you know and love on the largest ships in the world.

Incorporating costume changes representing all era's of The Beatles and authentic instruments that re-create that special sound which changed the world of popular music, The Fabfour Perth Beatles Tribute show will take you on an unforgettable nostalgic ride from 1962 to 1969.